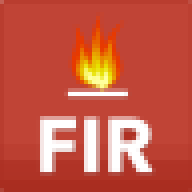 Where’s the smoke coming from?

Wildland fires can be a significant source of smoke that not only impairs our ability to enjoy clear vistas, but the gases and particulate matter it contains can be harmful to public health. When you see smoke in the sky it may be originating from a relatively local fire or a fire that is occurring several hundred miles away. True color composite imagery acquired by Terra MODIS, Aqua MODIS, S-NPP VIIRS or NOAA-20 VIIRS are provided as “Backgrounds” layers in FIRMS and FIRMS US/Canada Fire Maps. These layers display a "natural color image" of the Earth’s surface as it would look to the human eye from space. Consequently, it is easy to see smoke using this type of imagery in clear sky conditions. The time of observation for these four satellites occur at different times during the day, so they can be used to identify current sources of wildland fire smoke and visualize its transport across long distances. Use the Orbit Tracks and Overpass Times layers to determine the daily overpass time for each satellite.

The standard Aerosol Index (AI) derived from S-NPP OMPS observations can also be used for identifying and tracking smoke as well as other aerosols. The OMPS Al, available as an “Overlays” layer in the FIRMS and FIRMS US/Canada Fire Maps, detects and measures the density of smoke and suspended particles in the vertical air column in the atmosphere. Typical values of the AI range from 0 to 5 and indicate dust storms or biomass burning smoke located in the lower troposphere (1-3 km). Values of 5.0 indicate heavy concentrations of aerosols that could reduce visibility or impact human health. For AI values significantly higher than 5 use the OMPS PyroCumuloNimbus, or pyroCb, AI layer. Larger pyroCb AI values between 5 and 10 usually indicate dense smoke from intensely burning fires that reach higher in the troposphere. Once the index gets above 10, the smoke has likely been produced from a pyroCb event, with dense smoke lofted into the upper troposphere and, often, into the stratosphere. 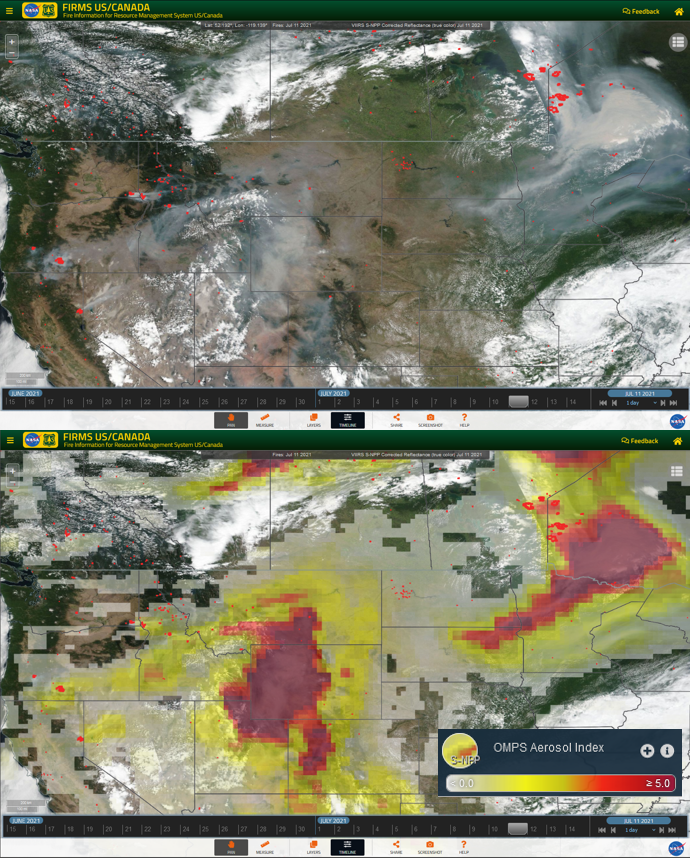 Wildland fire smoke visible in S-NPP VIIRS true color imagery acquired on July 11, 2021 (top). Active fire detections are displayed as red points. The aerosol index derived from S-NPP OMPS observations collected at the same time as the VIIRS imagery is provided for comparison (bottom). The high index values over Utah, Colorado, Wyoming and Montana indicate high concentrations of aerosols and are a result from fire activity in the Pacific Northwest and northern California. High aerosol index values in the eastern Dakotas, Minnesota and western Ontario are sourced from wildland fire activity in eastern Manitoba and western Ontario.