I need to identify people and organizations in different roles

Technical Contacts - Technical contacts are individuals or organizations that can respond to technical or scientific questions that users have about resources. These contacts should be included in both the identification and distribution sections of the metadata.

Investigators - Investigators are members of the science team that should be included in the citation for the resource.

The simple UML for the object is shown here. It includes one required element and four optional elements each of which can occur once.  The CI_Contact includes information about physical and electronic addresses as well as a CI_OnlineResource as part of the contact information.

ISO Citations can include any number of organizations or people (citedResponsibleParties), each with one of the following roles: resourceProvider, custodian, owner, user, distributor, originator, pointOfContact, principalInvestigator, processor, publisher, or author (see Figure). For example, the principle citation for a metadata record, in the MD_Identification section, can include an author, a publisher, and any number of principal investigators. This is very different than the FGDC approach, where the idinfo section has a citation that can include, but not differentiate roles for, many originators and a single point of contact with no clear role definition. 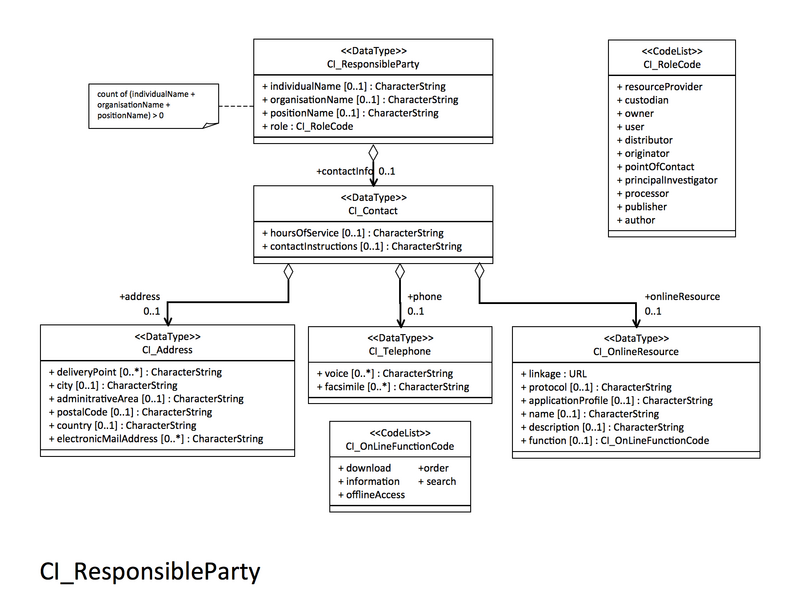 The ISO dialect combines people and organizations into the CI_ResponsibleParty object, a flexible structure that supports many combinations of organizations and people. Most objects that include associated responsible parties can have any number, so, for example, a citation can have people identified in any or all of the roles listed in the CI_RoleCode code list.

The structure of the CI_ResponsibleParty is:

Where are ResponsibleParty objects?  People can be connected to ISO metadata records in eight places, and in each CI_Citation. Those locations are shown in this Figure. In some cases the roles of the people are determined by where they are in the standard. In other cases, they are determined by the role code. See the Roles-by-Position vs. Roles-by-Code discussion below for more information.

Codelists are shared vocabularies used throughout the ISO Standards to provide a (usually small) set of choices for the value of an element. In many cases they provide a standard set of tags that can be used for classifying an object. They can be identified in the UML because their types end with “Code”, i.e. CI_RoleCode.

See CodeLists for a list of all ISO CodeLists.

People can play many different roles in the life-cycle of scientific datasets. There are two ways that those roles can be reflected in a metadata structure: by position and by code. Many people are familiar with the roles by position approach because that is the approach used in the FGDC CSDGM. The person referenced from the metadata section is the metadata contact, the person referenced from the distribution section is the distributor, and so on. Using this approach means that the object that holds information about people does not need any role indicator. That information is supplied by the position of the person in the structure.

The ISO Standards combine the roles-by-position approach with the roles-by-code approach. Roles can generally be inferred from the positions of CI_ResponsibleParty objects in the structure, but flexibility is increased by adding a code for role to the each object. This is helpful when citing a dataset that involves people in multiple roles (principle investigator, publisher, author, resourceProvider) or when specifying the point of contact.

The roles-by-position approach allows the roles of the people involved with a dataset to be known even when they are accessed separately. For example, a specific xPath can be used if one were interested in the metadata contact for a resource: (/gmi:MI_Metadata/gmd:contact), but a general xPath (//gmd:CI_ResponsibleParty) can be used to answer the general question “what people or organizations are associated with this dataset”. In the latter case, the role code provides information about roles even though the people are being accessed independently.

The only required element in the CI_ResponsibleParty object is the role. As in the case of the CI_OnlineResource, a CI_ResponsibleParty with only the required field(s) is not very useful. In this case, however, no reasonable solution can be achieved by requiring individualName or organisationName or positionName. The solution is to constrain the object by requiring that the count of individualName + organizationName + positionName be greater than or equal to one. In other words, at a minimum one of these three elements must exist.

There are two techniques that can be used to test the “validity” of ISO metadata in XML. The first is to use the XML schema which defines the structure and types of the elements and the number of times they can occur. The schema rules are expressed as the cardinality in the UML descriptions used in this wiki. The CI_ResponsibleParty constraint described above cannot be specified in an XML schema document and so cannot be tested using simple schema validation. Instead, a tool called Schematron can be used to test constraints or business rules that are included in the UML. Many times these rules involve multiple elements, as in the CI_ResponsibleParty case. In some cases an organization can specify several sets of schematron rules to test conformance at different levels.

This table reflects the MENDS Phase 3 voting results for 5.x items pertaining to the mapping of ECHO and ISO roles.