I need to provide information about the content of the resource and the parameters being measured or calculated.

The MI_CoverageDescriptions Figure shows the simplified UML of the three objects available for describing multi-layered datasets. How are these objects used?

MI_CoverageDescription/attributeDescription The attributeDescription provides a description of the attributes in the dataset and potentially the format. It is typically implemented as an xlink to an external resource which is, hopefully, machine readable. It might be some time before this goal is reached. In the mean time, this could be a human readable resoiurce. For example, the SST dataset could include a link to the NESDIS Polar Data Users Guide like

MI_CoverageDescription/MD_CoverageContentTypeCode is a codeList that gives the type of the coverage. The Standard includes three options: image, thematicClassification, and physicalMeasurement. It seems likely that we will need to add some other values to this content to describe the variety of types included in satellite products. Additions suggested for the revision of the Standard include: referenceInformation, qualityInformation, auxilliaryData, and modelResult.

MI_CoverageDescription/dimension An MD_CoverageDescription can contain any number of dimensions. This role name seems to cause quite a bit of confusion. The object that it refers to is a MD_RangeDimension or a MD_Band, and the elements in the MD_Band object (minValue, maxValue, units, scaleFactor, and offet) suggest that this could be one of the layers in a multi-dimensional dataset. The definitions of these elements, however, clearly indicate that this is, in fact, a band in the electromagnetic spectrum. Changes to this structure have been proposed as part of the revision to 19115. That proposal is described below.

MD_RangeDimension/sequenceIdentifier/MemberName This field uniquely identifies the band and relates it to the attributeDescription. It includes a name that does not get translated into other languages, and a type.

MD_RangeDimension/sequenceIdentifier/descriptor This field provides a short description of the band. 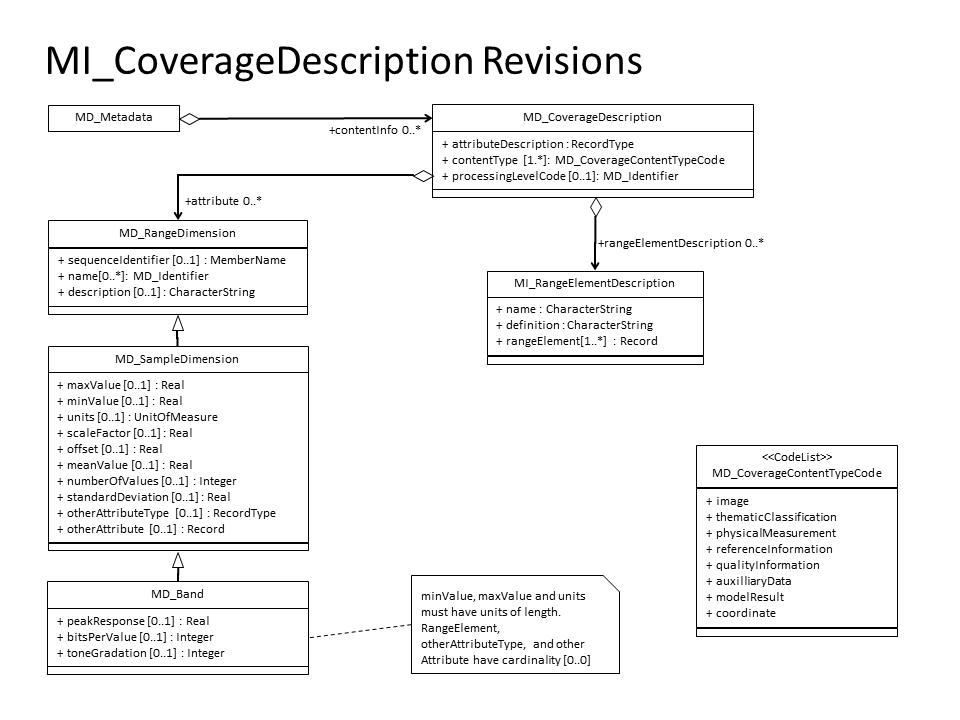