The NASA Earth Science Data and Information System (ESDIS) Project collects, processes, and distributes a wide variety of environmental observations and data products. High-quality metadata and documentation is required in order for these data and products to contribute to reproducible scientific understanding. The Metadata Evolution for NASA Data Systems (MENDS) Project recently recommended that ESDIS adopt International (ISO) metadata standards and, at the same time, explore extensions to those standards that might be required for particular NASA data types and products. The process of understanding the fit between NASA requirements and the ISO standards is described here.

The first step in the process of evaluating the fit for ISO and NASA is the identification of NASA documentation and metadata requirements. These requirements come from many sources including existing metadata systems, future missions, NASA science teams, and users (see Figure 1). Those that come from existing metadata systems are well known and already implemented in operational systems. In contrast, mission and user requirements tend to be emergent, particularly for future missions and applications. 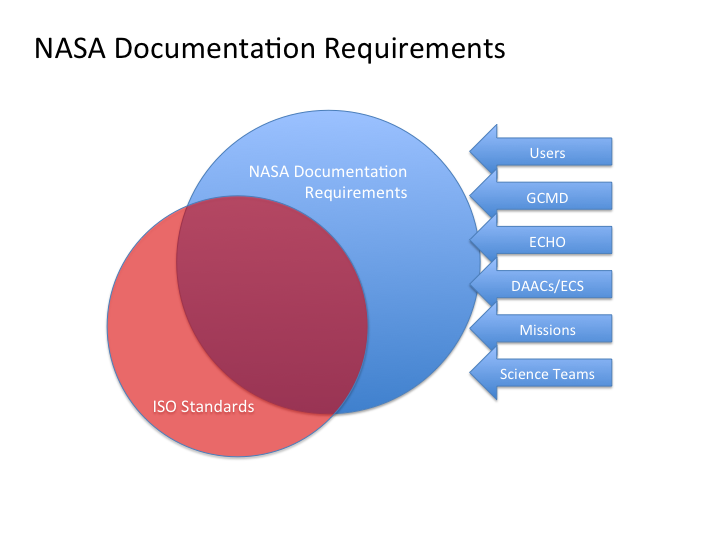 Once identified, requirements can be separated into groups depending on whether or not they are addressed by the current ISO Standards. Once identified these two groups are treated in different ways.

NASA requirements that are addressed by the ISO Standards need to be allocated to the consensus locations in the standards and guidance needs to be created describing those allocations. If those requirements come from existing metadata systems, the guidance should include tools that transform content from those existing systems into ISO and back. These transforms and examples of the translations will be important tools in increasing understanding of the ISO Standards across the ESDIS community and integrating ISO metadata into existing systems.

Requirements that are identified but not addressed by the ISO Standards are candidates for extensions to the ISO Standards (and incorporation into the NASA Best Practices). These requirements need to be evaluated and integrated as extensions into the ISO conceptual models. These models include a standard mechanism for accomplishing this integration. Once the conceptual fit has been determined, an XML representation of the new content must be developed using the appropriate ISO encoding rules.

NASA requirements that are not addressed by current ISO Standards are important candidates for inclusion in revisions of these Standards. Systematic revisions of ISO Standards can occur every five years at the request of a member. ISO 19115, is just finishing the first systematic review and ISO 19115-1, the revision, includes many improvements motivated by NASA and other members of the U.S. Environmental Data Community. The standard for documenting data acquisition and images (ISO 19115-2) will be eligible for revision beginning during 2014. New metadata elements developed as part of the NASA Best Practices for ISO will be proposed for inclusion in that revision.

This process is straightforward and many members of the ESDIS Community have extensive relevant experience from fitting together different concepts and data models over many years of interoperability work. Nevertheless, some real-world examples can help clarify the process.

Connections to Web resources are a critical part of any modern metadata dialect. All existing ESDIS metadata dialects (DIF, ECHO, and ECS) include the online resource concept (Figure 2) and all include the essential element of that concept: the URL. They also include the concept of descriptive material that accompanies the URL, termed description or comment. The dialects differ in other details of how the overall concept is described and, therefore, represented in XML.

The ISO Standards also include the concept of online resources and the description is similar to those in the NASA dialects (see Figure). Again, there are small differences and related questions, i.e. how does dif:URL_Content_Type relate to iso:name or iso:function? These differences need to be considered by the community and consensus must be reached in how the details are mapped between the dialects. 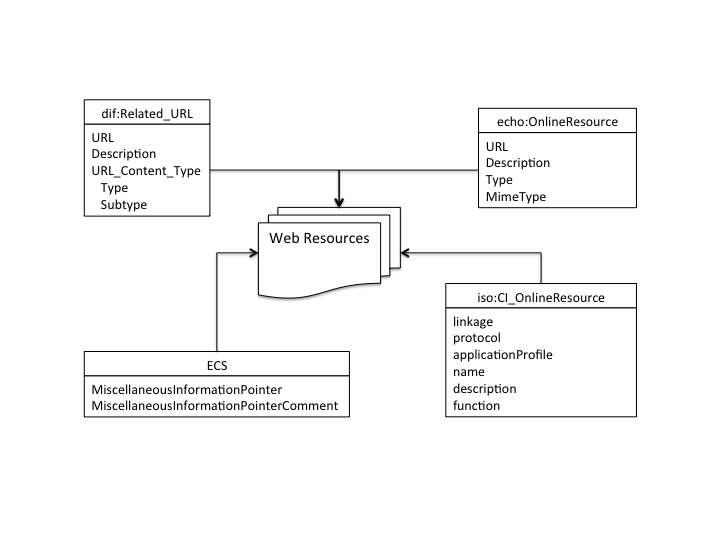 The current ISO approach to describing an instrument (shown in the solid box in Figure 3) lies somewhere in between. It includes an identifier and classification information (type), a brief description, a citation to more information, and a pointer to the platform the instrument is mounted on.

The ISO Standards also include a mechanism for including implementation specific information in the metadata using standard RecordType and Record data types. This mechanism is currently not used for instruments, but the ISO instrument description could be extended by adding additionalAttributeType and additionalAttributeValue elements that would allow the same robust descriptions currently included in ECHO and ECS to be included in the ISO metadata. These extended elements would become part of the NASA Best Practices for ISO. 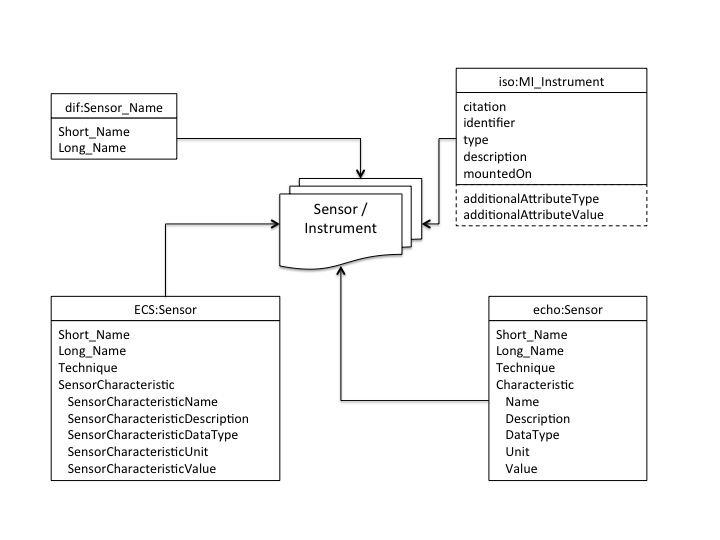 The process of evaluating the fit between NASA requirements and ISO standards is straightforward and familiar to many members of the ESDIS community. Existing ESDIS metadata dialects provide structured and well-understood picture of many ESDIS metadata requirements. Developing consensus crosswalks between those dialects and ISO is a good step towards understanding the requirements and identifying those that are and are not addressed by the ISO Standards. In addition, this is an important step towards community engagement because the community is already familiar with these dialects. Working with new missions is another important element in the process.